EFT vs ACH – What’s the Difference Between These Two Payment Methods? 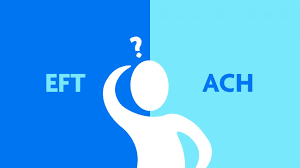 In the world of electronic bill payment, there are two major players in the scene: Electronic Funds Transfer (EFT) and Automated Clearing House (ACH). EFT is a term that you’ve probably heard quite often if you’ve ever sent money to your mortgage company, your dentist office, or even the IRS. The ACH system is an electronic payment system that is used domestically by most banks in the U.S. It works behind-the-scenes when you make a deposit, withdraw money from an ATM machine, pay monthly bills online with your debit card, or transfer money between your own accounts.

Both the EFT and ACH systems are great for making payments, especially if you’re using a computer or other technology to make them. However, there are two major differences between these payment methods that companies should know about before deciding which one works best for their business (either merchant account providers can provide both services to their clients). The first difference between EFT and ACH is that the processing time for the payments. By the very definition of these payment systems, EFT transactions are processed directly from one account to another.

This means that they’re usually faster than ACH transactions. An example will help here: Let’s say you have an online retailer who makes the sale using information from your credit card. The retailer then sends the transaction information to their merchant account provider who sends it on to your credit card company so that the money can be transferred into their business checking account. Since this process involves at least two or three steps, it takes a little more time than an EFT payment would. This means that ACH is a better choice for companies that need to take payments from customers and not have the money hit their bank accounts until a day or two after they sell something using an EFT system.

The second major difference between the two systems is that ACH transactions are less regulated than EFT transactions. In many cases, this can be a good thing: It means that your money will be put into your company’s account faster, but it also means that you’re much more likely to run into processing problems with an ACH transaction.

For example, if a customer tries to make an ACH payment and there is not enough money in the customer’s account, the bank may reject the transaction even though it was authorized by the customer. If you have an EFT account, however, the company’s bank would pull money from your customer’s checking account – no matter what the amount or situation is.

The bottom line here is that ACH transactions are better for companies who plan to accept payments several times a day because it can help reduce transaction costs while EFT is better for companies that only have a few transactions per day. If you need to accept payments in your business, then both of these options are good ones. The big difference is really the speed at which money gets into your bank account and how much you’re charged for using one or the other system.

What is Facebook Pay and how does it work?

What Is a E-Wallets and How Does It Work?

E-Wallet refers to an electronic device that stores digital cash. It is…

Tap and Pay, or NFC payments, is a mobile payment system that…